Skip to content
Was having a discussion with a work colleague last week. He asked me what my thoughts were on Putin and his anti gay rhetoric. My colleague is a staunch Republican and conservative. I take care to state both, since I am very aware that not all conservatives are Republicans. So it came as a bit of a shock to him when I said I thought Putin got it wrong on this (and a myriad of other things). And his next question for me was “I thought you were republican (and conservative) are you not?”.  Did not know how to answer that, especially since I think a bare chested Putin is ‘overcompensating’.
I thought I had a good understanding on the differences between the party platforms and their underlying philosophies. But just in case they updated something that I may have missed, I figured I would hit the ol’ search engine to refresh my bearings.
My first stop was the trustworthy site Diffen.com (comparison) and I did a quick test typing in the comparisons between Democrat vs Republican vs Libertarian. And I was depressed by the results. I didn’t fit into the classic platform descriptions and attributes.
and to make matters worse…. 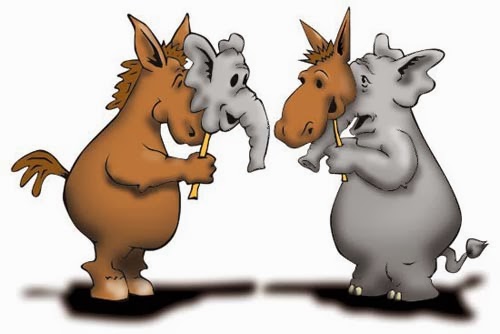 Therein lies the rub. The minute I say I am a Republican or Democrat  (liberal or conservative) a standard set of attributes and positions are automagically assigned to me. What ever happened to taking an issue letting it roll around the old noodle and come up with a position based on what seems right to you. Why the need for the template?

So I end up being a  Republibertocrat  (or in simplified campaign terms  – the Undecided voter!). I generally lean liberal on social issues and ‘somewhat’ conservative on fiscal issues. Obviously come election time I am like the photo above-  an ‘elephant’s ass’!

Wouldn’t it be cool to customize your own vote? Hear me out, don’t laugh yet….
Here is a potential scenario – What if there were three candidates for the presidency and I was able to allocate my one vote (in parts) to the candidates and I could decide the split based on my stance on the various issues during that election year?
…..OK maybe you can go ahead and start laughing.
Ah well..this republibertocrat/undecided/independent/liberterioconservative voter can dream!