Yeah reminds me of the Lil Wayne/Akon/Wycleaf Jean Song – Sweetest Girl – “Cause I’mma tell you, like Wu told me, Cash Rules Everything Around Me….singing dolla dolla bill y’all”

I am not for one to take my cue from a rap song especially from one that that has a controversial subject like the “Sweetest Girl” song. But somehow this chorus line kept ringing in my head recently after the Supreme Court decision on campaign finance.has left a LOT of citizens shaking their heads.

This is illustrated below from the NY Daily article

So this is basically become a PAY & PLAY democracy. The Supreme Court’s decision was based on ensuring the protection of the First Amendment i.e. Free Speech. But as described by this article  there is strong reason to believe that the judges are out of touch with reality.

Even though this ruling will affect a few HNW (high net worth) donors, here are specific reasons why this is really really bad for our democratic process: 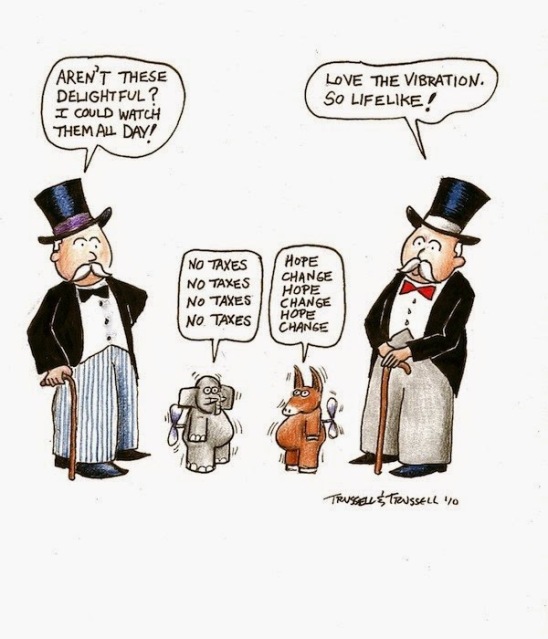 a) The Golden Rule – the man with the Gold makes the rules. Agree this is a bit of an oversimplification but as the above article quoted, the person with the most money gets to “buy the most free speech that is often enough to drown the opposition”.
Exhibit A – All GOP candidates flying to Las Vegas a few days ago to court Sheldon Addleson (including the apology of one Mr. Christie).
From Jon Stewart Friday April 04th Episode: I would respectfully like to approach the bench, and remind the Court that when the media refers to Sheldon Adelson as a super-donor, they’re not talking sperm.

b) More money means more lengthy primary cycles. As much money can be given to campaigns that much will be taken by them. With no more limits there there is a possibility of a huge list of candidates who could all be potentially well financed and drag the primary out.

c) Refer to my previous post on One Percenters. This ruling has a lot of unintended consequences. A major one being the impact to income and wealth distribution. More money buys more speech which in turn buys more money and the wealth continues to get concentrated within a small slice of society.

It is going to be very interesting to see how the 2016 elections play out especially from a spending perspective. How much super PAC and lobbyist money will be  spent and how will that influence the electoral process remains to be seen.
Maybe the answer is with how our Supreme Court works?
– Why do Judges have to be partisan? and if that is the case why aren’t Libertarian or Progressive judges ever nominated.
– Why do we need appointments for life which results in these judges who are not in step with the times? (yeah yeah I am aware of the obvious reasons).Obviously none of that is going to change anytime soon.
As stated in the same Jon Stewart episode……..

JEFFREY TOOBIN (4/2/2014): Basically, it gives people who have a lot of money at their disposal the chance to spread their influence even more widely.  If you have a million dollars now, think how many chunks of $5,200 that makes.  It’s a lot.  You could write a lot of checks.

Yep!  Lots and lots of $5,200 checks.  The last great hope of preserving our democracy from the corrupting influence of money is carpal tunnel syndrome.

Maybe like the Legislative section our Judicial section also needs a reboot.  I for one am hoping to win the lottery cause I badly need the “speech” to stop the idiots from teaching intelligent design in our school curriculum.

This topic has been a subject of study, debate and analysis since antiquity. My interest is NOT to examine if there is a positive merit to faith and religion. That is a vast and very contentious subject and can be deferred to another day. My specific interest is to understand whether Faith exposes the limits of Scientific Inquiry and if there is in fact an opportunity for coexistence in the scientific forum.

We are all painfully aware of the numerous struggles scientists had to go through, during the Middle Ages to be able to overcome religious dogmas and present conclusions about the universe that shattered religious world views. Neil Degrasse Tyson has an interesting article about Sir Issac Newton called The Perimeter of Ignorance.

Sir Issac Newton discovers, gravitation, optics, light spectrum, the laws of motion and on a “dare” invents Differential and Integral Calculus just so that he could explain the nature of planetary orbits. However, Newton cannot explain how adding objects to this gravitational law still keeps the solar system stable.

He is able to explain Moon and Earth, Sun and Earth all the two body gravitational models. However he is not able to account how the system is still stable with multiple bodies (Earth and Sun pulling but also Saturn pulling Earth, Mars pulling Earth and so on).
So Newton invokes Faith since he has reached his limit.  From Neil Degrasse Tyson’s article, “A century later, the French Astrologer and mathematician Pierre-Simon de Laplace confronts Newton’s dilemma of unstable orbits head-on. Rather than view the mysterious stability of the solar system as the unknowable work of God, Laplace declares it a scientific challenge and solves the issue using Perturbation Theory

Dr. Tyson provides a few more interesting examples of illustrious scientists who reach their limits and invoke faith only to have someone solve the issue later.

Let’s review the recent past where there have been a few specific cases where famous scientists such as Dr. Francis Collins (who let the decoding of the Human Genome Project) has been vocal about his faith, having written books and articles on this faith. By the way he is also the chair of the National Institute of Health. For a detailed analysis of Dr. Collins’ positions, Sam Harris’ article makes for good reading.

Harris asks a very germane question: Imagine: the year is 2006; half of the American population believes that the universe is 6,000 years old; our president had just used his first veto to block federal funding for the most promising medical research on religious grounds; and one of the foremost scientists in the land had that to say, straight from the heart (if not the brain).

What we have understood about ourselves and the universe around us in the last 100 years has been more than the previous 50,000 years combined. Science has debunked, defeated and demonstrated so many cherished myths, superstitions and beliefs which is all due to the “scientific inquiry”. Science continues to attack the “God of the Gaps” theory.

That isn’t to say there is no room for spirituality and faith. There has been numerous cases of sages and saints who have experienced great revelations via meditation, self inflection and contemplation. People use faith to cope with adversity, tragedy and loss.

That is however very very different from when posed with a limit of sceintific inquiry the answer is to outsource the explaination to a divine creator. 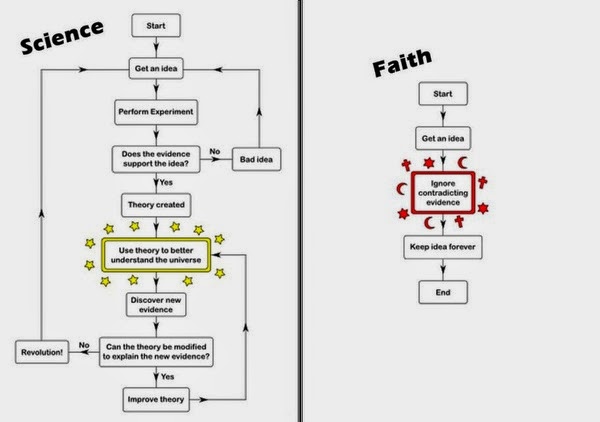 There is an alarming groundswell in this country where faith is now starting to be used to question the scientific process. This is going to have long term repercussions in our ability to continue to be a world leader in innovation.

Here is an example: If there is an argument on the quality of evidence regarding Evolution that is a worthy debate to have. If one comes to the stage with a book written a few thousand years ago about a world view from even far back it is not even worth having a conversation. It is like howling at the moon.

I am hoping that we will be able to improve the discourse where a sense of inquiry and reason guides our evaluation and not a reliance on bronze age literature and practices.