What is happening to the Fourth Estate? I thought our founding fathers were astute in putting checks and balances and ensuring that a free press actually challenged the other branches of the government. There was no way to foresee this huckster that is now the leader of the free world. Take the most recent sequence of events:

There have been a lot of articles and reviews in the recent past that (rightfully) call the Press to question on how much free publicity they provided the current President during the election cycle. The President, in turn, loves to chastise the press as ‘Fake News” at every opportunity.

However, there are a few problems with this:

Which brings me to my main point. We all now know where the fake news is coming from. It is not the main networks or any outlet that is rightfully questioning the accountability of this administration, it is coming from the White House.

THE FAKE NEWS GENISIS (Source – myself): 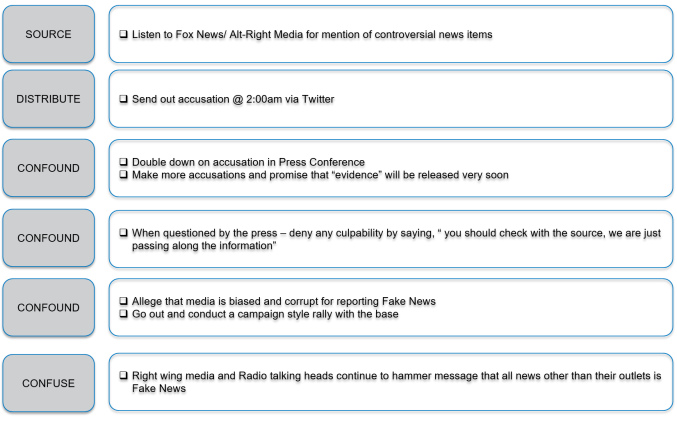 (I realize I missed the Facebook channel in the steps above)

I remember a quote from one of the reporters, “in the absence of facts, both our opinions are accurate”. Even though we are now living in a fact free country, I am encouraged in the fact that the press has been hitting back and calling for accountability and we are hopeful that this will reduce the level of egregiousness.

At the end of the day, the blame lies squarely on us, the people. We allowed ourselves to get hoodwinked, sucker punched and bamboozled into this.

My faith in the intelligence of our plebiscite is at an all time low. Maybe common sense is not so common after all!