The Year 2015 has been a horrendous year for deaths due to gun violence and mass shootings. There have been one mass shooting every day in Yr-2015 and the statistics are saddening – 2015 Mass Shooting Deaths

We have been having this debate for a while now and the talking points for the gun ownership side is really getting stale. Same talking points same reactions but the number of Mass Shootings continues unabated.

After this most recent horrific shooting if we would like to revisit the gun control issue, the overwhelming answer from gun advocates is:
a) This is NOT the time to talk about gun control this is the time to grieve (as stated by Louisiana Governor Jindal when questioned after the Lafayette shooting)
b) We should not politicize the issue as it it is the time to mourn

So let’s unpack that:
– “When”? is it the right time to talk about gun control? At 372 shootings in YR-2015 is our  leadership saying that we literally don’t have any time to have a conversation since we are in “constant” grief and mourning mode? That is ridiculous beyond any realms of rationality.
– How come the horrific Bengazi killings CAN be politicized with not one, not two but NINE hearings and counting but we cannot have a meaningful conversation in the Congress about gun control?

President Obama in utter frustration actually called for the politicization of this issue. I guess this was his way of telling people that he cannot do it all alone, the public must exert their influence in the voting booth. (LINK) 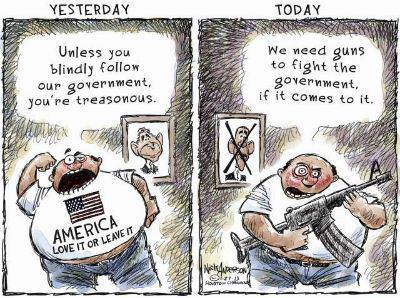 I have covered the whole issue of how the NRA influences this issue Link to Blog Post . But the broader issue is how do we do what Australia and Great Britain have been able to do with sensible gun control (granted they did not have a “Second Amendment” to deal with). The statistic below is very sobering and should really put the gun debate in perspective:

The Centers for Disease Control and Prevention estimates that 153,144 people were killed by homicide in which firearms were used between 2001 and 2013, the last year that data are available (that number excludes deaths by “legal intervention”).
The Global Terrorism Database – which uses a criteria to determine terrorist attacks but also includes acts of violence that are more ambiguous in goal – estimates that 3,046 people in the U.S. died in terrorist or possible terrorist attacks between 2001 and 2014.
The top number doesn’t even include suicides and legal police killings (which boost the number to 394,912). Still, just counting homicides alone, 11,780 Americans were killed by guns a year on average, in that time period, while 219 on average were per year killed by terrorism – although of course the 9/11 attacks are the bulk of the deaths.

Obama in his address – ““We spend over a trillion dollars, and pass countless laws, and devote entire agencies to preventing terrorist attacks on our soil, and rightfully so. And yet, we have a Congress that explicitly blocks us from even collecting data on how we could potentially reduce gun deaths.  How can that be?”

So why can’t we do what Australia did after the mass shooting in Tasmania. How was a conservative President in Australia able to mobilize a national cause and address this issue in one fell sweep?

In this article here the author references a colleague who states – “This is not about the government saying you cannot own a handgun. This is about society saying you should not have a gun, especially in a home with children.”


The bottom line is we need to do something fast as trusting our elected officials to mobilize a solution has been a bleak proposition for quite sometime.

(bad pun intended) – we need a call to arms!